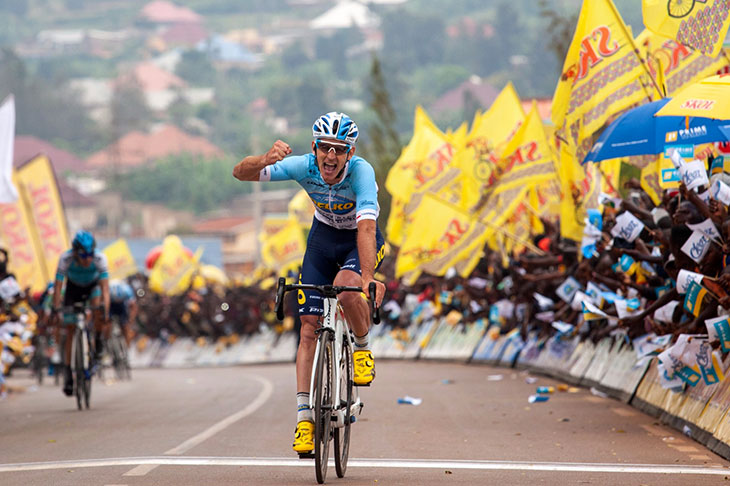 After falling short for a stage win twice in the ongoing Tour du Rwanda, Kasperkiewicz Przemyslaw from Delko Marseille Provence was a man on a mission on Friday as he rolled up his sleeves and rose to the occasion winning the Musanze-Nyamata, 121.1km of stage six, his first triumph in Tour du Rwanda.

The 25-year old who finished third and second in the first and second stages respectively made today was his day as he raced with the breakaway for the whole of the race before making a striking attack in the final 3km to claim his first stage win.

Just after hitting the 0km section, two riders Jean Damascene Ruberwa of Team Rwanda and James Fourie of Pro Touch attempted a fast breakaway but they were quickly brought back shortly before reaching the first KOM points section of the day that was after 19km which was taken by Hailemichael Mulu from Dimension Data for Qhubeka beating Team Rwanda’s Moise Mugisha and Guillonnet Adrien of Interpro Cycling Academy.

After 40km, the breakaway was in for the first intermediate sprint points of the day and were well taken by eventual winner of the best sprinter of the day Rohan du Plooy who retained this jersey.

After the first hour which the race completed on an average speed of 41km/h, Team Rwanda’s and two-time Tour du Rwanda winner Valens Ndayisenga along with Eritrean Mulueberhan Henok attacked from the peloton and joined the breakaway which had stretched the lead to 1’10”.

Eritrean Debesay Abreham Yakob later scooped the second intermediate sprint points that were after 70km and as the race headed into the final 30km, the breakaway gap was at 2’15” before rapidly shrinking to 1’15” in the final 25km.

Heading into the final 10km, the gap was standing at 1’23” before a number of attacks in the final 3km in the breakaway which saw polish professional rider, Kasperkiewicz Przemyslaw rise to the occasion to record his first Tour du Rwanda stage win and the second for his side Delko Marseille Provence following Fedeli Alessandro’s opening stage win onnn Sunday.

After stage six, Merhawi Kudus of Astana Pro team retains the yellow jersey heading into the penultimate stage having so far clocked 20h24’53’’, 17 seconds ahead of Direct Energie’s Taaramae Rein who has posted 20h25’10’’ with Badilatti Matteo from Israel Cycling Academy retaining the third place having used 20h25’38’’, 45 seconds behind.

Meanwhile for the penultimate stage on Saturday, the riders will set off from Nyamata and head back to the capital city where they will cover a distance of 84.1km.